Caryn enjoys a variety of sports, particularly boxing, which she’s been passionately writing about for the past several years. She takes pride in helping fans gain a better understanding of the skills and techniques involved, who the athletes are, and why they do what they do.

Caryn has interviewed some of the top boxers in the sport as well as up-and-coming fighters; she has also written detailed and thoughtful pieces that examine specific matches and the state of the sport.

Scoring and Refereeing Fights: The Essentials

I attended a three-day official certification course for prospective boxing judges and referees. Here are the most critical things everyone who loves or is involved with the sport should know … read the full story

“If you can hit the person with the jab, you can also hit ’em with a hook or an uppercut because that means you’re close enough and you’ve got positioning. You can get the opponent’s timing, too, using your jab.” … read the full interview

Outside the Ring: Austin Trout Brings the Warrior Out of Others

Austin has become certified to lead classes with basic, non-contact boxing exercises for people with Parkinson’s disease. “I tell people boxing can be the vehicle that you use to do anything you want. Boxing has been my life savior.” … read the full article

“My style comes with a rough and aggressive approach that not many people understand. The work rate at which I perform is not common. To be able to have the reflexes and willingness to do what I do, that also doesn’t come very often…” read the full interview 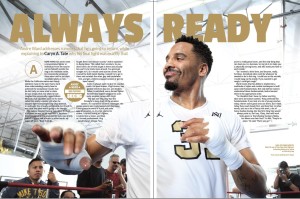 “The right hand landed–I came off the ropes, he relaxed for a split second, and I stepped in, and boom! He did a funny dance.” … buy the issue

I had the rare opportunity to observe the California State Athletic Commission rules meeting with the representatives of the fighters competing on the Wilder vs. Fury card … read the full article

Shields vs. Hammer for the Fate of Women’s Boxing

Hammer has been receiving a lot of praise in the media for her solid jab, and she does have a good one. However, Shields has that and more. It could be said that Hammer has one good punch (her jab), while Shields has multiple good punches … read the full article

“The gameplan just unfolded. I didn’t have a set style. Sometimes I would walk him around the ring–I wasn’t running, I would walk him. Run him into shots. Get back inside. Steal wind from him. Hit him with some short body shots, uppercuts, and just–doing what I do. My inside game, and then beating him on the outside.” … read the full interview

The CSAC is striving to use the data it has collected over the years, combined with medical research showing the connection between severe weight-cutting and an increase in the danger of concussion and brain trauma, to work with the sanctioning bodies to establish more effective rules surrounding the weight issue … read the full article

“I just always wanted to make everybody feel equal. I always look out for the underdog.” … read the full interview

“When I came up, the way I was taught was I had to get my feet in sync first. I had to learn how to move forward and backward, and then laterally, left and right. And then take that to the next level.” … read the full interview

Deontay Wilder Exclusive: Behind the Hype

Overcoming doubt and persevering in the face of injuries and bigger, perhaps stronger opponents were the themes of Ward’s Hall-of-Fame-worthy career … read the full article

“I consider myself a thinking fighter where I can make those adjustments, and I can kind of read my opponent’s body language, and read their punch selection before they even throw punches.” … read the full interview

“It’s a beautiful thing to know where we come from, where my dad comes from–the struggles and hardships that he had to go through to give us a better life. My dad came from nothing, with a third-grade education, an immigrant from Mexico.” … read the full interview

Deontay Wilder on Drug Testing: “I Believe in Three Strikes, You’re Out”

“There comes a time when you have to take a stand and stand up for what is right,” said Deontay. “So we’re gonna continue to strive for greatness, and continue to keep boxing a clean sport.” … read the full interview 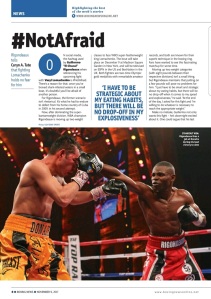 “While I respect Lomachenko, the reality is he’s never fought against someone with my pedigree and skillset.” … buy the issue

“Someone said to me once, ‘If you never want to work a day in your life, find something you love to do and find a way to make it pay.’ And that definitely is what I feel like I’m doing.” … read the full interview

“Being a veteran in boxing for over 60 years of my life, I leave no stone unturned. I’m trying to create something different in boxing so that it makes boxing better, it brings it up to a better level…I want to make sure the fans get a fair shake and we don’t have any more black eyes in boxing with these controversial decisions … read the full interview

Daniel Jacobs on Golovkin Loss Being a Victory; Talks “Get in the Ring” and Future Plans

When Daniel “Miracle Man” Jacobs was undergoing a life-and-death battle versus osteosarcoma, he swore to himself that when–not if–he made it through, he would find a way to help other people battling cancer … read the full interview

Ward talked about how he and his trainer Virgil Hunter fixed that problem in preparation for the rematch. In the latest fight, the difference is plain to see. Ward’s use of feints was on display from the first round … read the full interview

Hurry Up and Wait: The Ratings Game

Sanctioning bodies, which control the various championship belts and rankings, exist to give some semblance of order to boxing … read the full article

Ward landed devastating body punches, with both hands, that I could hear ringside like a bell … read the full article

Andre Ward: Something That’s in Me

“Since I’ve been a kid, in the Olympics–I was never the biggest guy. I’ve always been kind of understated. That’s just my lane and my story, and I’ve learned to be comfortable there. It’s a tremendous source of motivation knowing I can overcome in those situations, regardless of what it looks like.” … read the full interview

Some athletes are so skillful that they seem almost untouchable in the primes of their careers. Many of these athletes are so gifted that they make their mastery of their art form look easy to the untrained eye, which sees none of the daily toil and sacrifice it took to achieve greatness … read the full interview

Since turning pro 19 years ago, “Amazing” Layla McCarter has amassed some of the most impressive accomplishments in all of women’s boxing … read the full interview

The Truth About Premier Boxing Champions

In the mainstream boxing media, there have been a lot of statements made over the past few days regarding Premier Boxing Champions (PBC) and whether the series created by Al Haymon is on its last legs … read the full article

Shawn Porter Explains His Style of Fighting: “I Always Try to Make a Guy Fight Me the Way I Want Him to Fight”

“Showtime” Shawn Porter (26-2, 16 KOs) is a monster in the ring of the old school, infighting variety. Porter is in the middle of training camp in Las Vegas, preparing for his April 22 bout against Andre Berto (31-4, 24 KOs). The fighter known as “Showtime” graciously stepped away from training for a few minutes and granted this exclusive interview … read the full interview

One of the reasons so many people love the sport of boxing is because it’s a metaphor for life. It’s inspiring when a fighter gets hurt or knocked down yet rallies back to overcome the challenge. Similarly, Daniel “Miracle Man” Jacobs’ (32-1, 29 KOs) story is one of the ultimate triumph of human spirit and strength, and it speaks to us on a deep level … read the full interview

Dumbing Down the Sweet Science

WARd: Timing is Everything

Great fighters overcome. They overcome struggle, injuries, knockdowns, defeats, and near defeats. They find another gear and pull something out to make their victory happen. Andre Ward is no exception … read the full article

In many ways, his disciplined behavior hearkens back to champs of yesteryear: he’s respectful and courteous with everyone, even his opponents (provided they don’t disrespect him), he takes on all comers, and he is always in shape. Outside the sport, he is a champion of bullied children through his activism in the It Gets Better campaign. In addition, he helps raise awareness and supports legislation in the fight against domestic violence towards women …. read the full interview

The Marvels of Maravilla

Martinez’s style is unorthodox and would be downright dangerous if used by someone without the skill and the natural gifts possessed by the middleweight champion. He fights with his hands held low and moves around his opponent, working to keep him from setting his feet and efficiently keeping him guessing. But he’s more than a moving target—while he maneuvers, Maravilla is also on the offensive, throwing—and landing—a lot of awkward shots on his opponent … read the full article